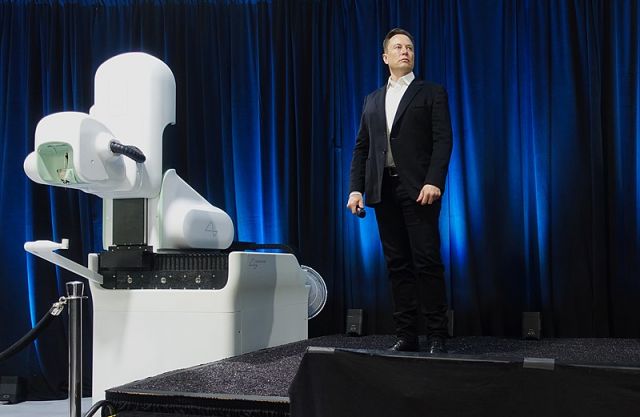 The American company Neuralink has opened a vacancy for the position of head of clinical trials of brain implants in humans. The  accompanying description states that the applicant will have to “work closely with doctors and leading engineers”, as well as “first-time clinical trial participants”.

This means that the billionaire Elon Musk, which owns the Neuralink company, is ready to implant a neurochip in a person. Before he carried out similar experiments only on animals.

Musk loves to talk about artificial intelligence and the threats it poses to humanity. In order not to lose the competition to man-made intelligence (yes, yes, he puts the question in this way), it is necessary to develop a neurocomputer interface that will give people superpowers. With this goal, the entrepreneur founded another company in 2016, which he called Neuralink.

Three years later, the startup showed its first achievement — a microchip embedded in the brain of Gertrude's pig. It was used to record brain impulses: when a pig ate or, say, sneezed, the computer recorded signals that were displayed on the screen. Musk noted that the chip is absolutely safe and promised that people would start installing such devices in a couple of years. The procedure, according to him, will take no more than an hour and will be carried out by a special robot. The implant must be connected to the  brain with electrodes, and there will be no marks on the head, except for a small scar.  Now I could have a Neuralink chip installed, and you d didn know about it. Maybe I already chipped?» — joked the billionaire during the presentation.

In April last year, Elon Musk showed the new features of the developed neural interface: his startup published a video with a monkey playing computer ping-pong with the power of thought. A macaque named Pager was trained to play with a joystick and rewarded with a banana smoothie. The device recorded information about which neurons were activated during a successful game, compared it with movements of the animal, and formed models of the interaction of neural patterns with desired gestures of the monkey. Then the joystick from the computer was disconnected, but the monkey didn know about it (yes  and how to explain it to her?) and continued to play ping-pong, only now with the with the help of a chip implanted in the brain. That is exclusively by the power of thought.

Treatment and help for the disabled — just a prelude

In December last year, Musk said that in 2022 his company plans to implant the first human volunteers with a neurochip. This aligns with his plan to release devices to treat a variety of neurological conditions, from memory loss to addictions. The first to receive the implant should be people with severe spinal cord injuries.

And now Neuralink announces that it is looking for a specialist for the position of head of clinical trials for brain implants. “As director, you will have to work closely with the most advanced doctors and leading engineers, as well as the first participants in Neuralink clinical trials, — said in the vacancy announcement. — You lead and help build the team responsible for administering Neuralink's clinical trials and development the legal regulations that will appear in this fast-growing field».

FDA approval is required prior to testing. To do this, the company will conduct tests on a small group of volunteers to show that the technology works. This will be followed by trials on a wider group of participants to test the safety of the implantation procedure itself and the use of the neurochip.

Elon Musk hopes that the first human studies will demonstrate to the world and the FDA the possibility of restoring the ability to walk to paralyzed patients. "I think Neuralink has a chance to restore full-body functionality to those who have experienced a spinal injury, — he said in an interview with the Wall Street Journal. — The neuroimplant has performed well in monkeys, we do a lot of tests and just confirmed it is very harmless reliable and it can be safely removed . Such a chip will help an immobilized person to control a smartphone and computer with the power of thought alone, and to do it will be faster than could do with his fingers.

But treatment of neurological diseases and assistance to the disabled — just a prelude to a different, more massive use of neural interfaces. Their main purpose, as already mentioned, — rivalry with artificial intelligence. After all, he, as the shocking entrepreneur warns, will become stronger and stronger. A & nbsp; means more dangerous for humans.

Why do scientists leave it?

«You cannot be smarter than a supercomputer, and if not you can beat something — join  — Musk says. — Soon the vast majority of our intelligence will be digital. This is the same difference as between the cerebral cortex and the peripheral nervous system, which has neither consciousness nor understanding of what our brain is doing. She just gets tired, hungry, angry and commands her brain to do something about it».

The neural interface will help the person of the future to take control of his own mind and get the most out of it. It will preserve and strengthen brain functions in healthy people, monitor hormonal levels and use them for the benefit of the body. And more — endows a person with superpowers. For example, you can listen to music not with your ears, but with your brain directly. In the & nbsp; perspective, Elon Musk believes, people will be able to communicate with each other telepathically. Of course, not everyone, but only those who will have a Neuralink implant.

Even though neuroscience — this is now the cutting edge of science, the scientists themselves treat the activities of the ubiquitous billionaire, to put it mildly, with restraint. In the spring of last year, Neuralink left Max Hodak, its president and one of the founders, professionally versed in the topic of neurocomputer interfaces. He did give no public explanation for his dismissal.

Earlier, a large group of scientists left the startup, about 2/3 of its leading researchers. Their departure was also not advertised, but rumors leaked out that people did not agree with the ethics of animal experiments, and     the very attitude of the Mask to their activities. The point is that scientific experiments, especially in biology, are strictly regulated. Their methodology is detailed, and if a certain sequence of actions is not followed, the result will be considered unreliable, which means, it is impossible to publish in a peer-reviewed journal and get recognition from the scientific community. Every scientist knows this.

But Elon Musk — a businessman, he is primarily interested in a commercial result, and not some publications in scientific journals. When it became clear to the researchers who came to work in  Neuralink that they were required to do something different from what they studied at universities and what they did in laboratories before, they decided to leave the project. High earnings — this, of course, is good, but reputation is more important in this case.

Brain scientists like to say that it is the most complex object in the universe. It has 86 billion neurons and a million billion connections between them. How can you translate into "number" whatever is going on there? No amount of electrodes is enough for this. So far, science has more questions about what's going on inside our skull than answers. And perhaps it will be easier for Elon Musk to fly to Mars than to find these answers.